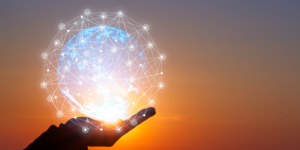 If the Corona pandemic teaches us one thing, it is that an enormous load of creativity is required to shape the new world after this crisis. In Buitenhof, an important talk show on the Dutch channel NPO 1, writer Ramsey Nasr made a plea for involving artists and other creatives in the thought process about the world after Corona. The creatives in the media world should also take this to heart. Let these people also think about concepts for the new society.

Not much could be expected from politics, according to Nasr, nor from the profit-maximizing large corporations. After Corona, society really needs a radical change of course, so he claimed. And I think he is right. You don’t go down a new path with yesterday’s guides. Ramsey quoted a statement by Macron: “We must be able to invent the unthinkable.” What a challenge. A new social concept for after Corona. What a fantastic thought process. I think the thinkers we need are not to be found within the existing ministries or in the boardroom of Shell. No, we need people who take freethinkers and their ideas seriously. Jules Verne, for example, was a freethinker in the past. He thought up a rocket to the moon. In those days, that was thinking up the impossible. Yet, years and years later, there were people on the moon. I believe that everything a human being can think up is ultimately achievable. And that is hopeful, sometimes frightening. We can come up with a new concept for our world. A concept in which the struggle is not about maximizing one’s own ability, but about opportunities for human dignity. Everything could be less. Less animal-abusing mega-stalls, less over-exploitation of our fields, less waste, less self-interest first. Another deadly phrase we have heard in recent years: ‘well-understood self-interest’. In order to develop a different social concept, you especially need people who can look at the current situation from a different perspective. As I said, you also need to invite creatives into this thought process. And if the creatives are not invited, then they must make themselves heard. It is badly needed.

The question is how we can apply the new creative thinking to our own media world. How do we make it more socially relevant? Of course, entertainment is important. People need entertainment. But the viewer is not as stupid as some programme makers seem to think. Personally, I find formats like Temptation Island and Big Brother an insult to the intelligence of the audience and creativity in general. On the other hand, wonderful programmes are made. As the creator of the hit format All You Need is Love, I know that pure love is an enormous source of inspiration. And love is needed in our world. I mean love in a broad sense. Love for mankind, for environment for instance. I see more and more programmes that make social issues comprehensible for young people and thereby try to involve the target group in them.

But I do not limit myself to television. In my hometown of Zutphen, I have set up a Think Team consisting of 30- and 40-year-olds with the project name of the New World. The idea is to invite speakers who are active in initiatives that will change the world. Like the two dredgers who came up with a method to green the Sahara. These kinds of projects are pure creative challenges. So, I ask creatives in our industry to look at our world and see where they can help to develop new ideas for the greater good. There is a lot of work to be done for creative minds.